Spring Creek, Society, and a Frenchman 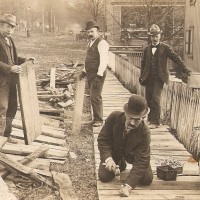 Published by Benjamin Kafferlin at Right Progress, and originally published in Res Publica by The Ashbrook Center under the title A Collapsing Community

Nestled in the scenic Allegheny foothills is my hometown where my ancestors have lived for over two centuries. Today, Spring Creek is in danger – floundering, it seems. In the literal sense, many folks have moved or passed away in recent years, and now only a few dozen remain to represent our tiny dot on the Pennsylvania map. Yet, while I was home for a few weeks, I also noticed a subtler change – a diminishing democratic element. A deep-rooted sense of community is sadly slipping away.

Spring Creek was a small town, now a small village. It had a couple of churches, a train station, a milk plant, two general stores, a community building, a post office, and several other buildings. Today, the last store closed and one church remains, along with the Volunteer Fire Department and the Post Office (which is soon to close). While there are still a couple dozen houses remaining, some vacant or uninhabitable, the majority are occupied by singles or older couples whose children are in their teens or grown up and moved out.

As dismal as that picture may seem for Spring Creek’s future, what really concerns me is the degradation of community involvement, as I knew it. Yes, I miss the nostalgic community of my childhood, but the worrisome aspect is that people are becoming increasingly isolated. Across the country, community involvement seemingly decreases as citizens become more independent for their entertainment and livelihood.

What a contrast to the world of my childhood, and especially the Spring Creek of my father’s childhood, or my grandfather’s. Back in those days, community meant a bond of commitment to each other. People depended on this assurance, not insurance.

Fixed in my memory are a few poignant examples:

I remember the fun evenings down at the local playground when a dozen guys would get together to play softball on Tuesday evenings. This same park is where my sisters, cousins, neighbors, and I would come to push each other down the slides, swing, and play pick-up games. Now, the field is unkempt, the ball-catch falling down. There are still enough people to play ball, but now we have Facebook to socialize and a Wii to play, so who cares?

Once, I remember helping a few men and their sons clean out and replace a big drainpipe that ran through town – by hand, with crowbars and shovels. Now there is another storm pipe that needs to be replaced, but the government will take care of it eventually, right?

In my early years, I remember going with my mother to quilting bees. It has been years since I’ve heard of one, but if people get together to sew anymore, it is for the interest’s sake, not the necessity of working together and mingling. Yet again, with new sewing machines, would it just be more efficient to forego the social interaction? Better yet, just go buy a comforter at Wal-Mart.

I remember often helping to bring in hay. However, the community is no longer needed for planting, haying, or barn-raising. Just this past summer, I watched one man harvest acres and acres in an afternoon with a couple massive tractors, while our old Farmalls sit in the barn for odd jobs and antique tractor pulls. If needed now, could farmers get help from the community?

It used to be that my family and neighbors went to the same church, within walking distance of the house. Now, the few who actually go to church select their denomination, mostly outside the immediate geographical community. Years ago, citizens went to the same local church and knew their neighbors on a deeper level than we know each other today – sharing problems and often getting advice and help. Now, it is easier to skip any political interaction and go somewhere low-key, right?

I learned first-hand what Alexis de Tocqueville simply calls “association” in his famous work Democracy in America. Almost all of my memories of childhood are of associating with community members for some sort of goal. My hometown taught me something about community, democracy, and self-government – in short, something about being American. I question whether young boys and girls are learning the same lessons from their computer games, social media, or even public schools. Consequently, I suspect that we are losing the sense of community that was so prevalent throughout American history.

Tocqueville wrote that Americans effectively combated individualism through community involvement. He said, “In order that men remain civilized… the art of associating must be developed and perfected among them.” That is the key element of modern democracy that is seemingly missing: Association and community involvement.

Tocqueville also warns that without political association, people become individualistic in their isolation. He called isolation “an erroneous judgment” having its “source in the defects of the mind as much as in the vices of the heart.” He warned that it “disposes each citizen to isolate himself from the mass… and to withdraw to one side with his family and his friends, so that after having thus created a little society for his own use, he willingly abandons society at large to itself.” At that point, government starts to centralize and democracy starts to crumble.

Community is organic and I doubt it can be recreated or replaced, but after seeing what has happened to civic involvement over my lifetime, I would echo Tocqueville’s warning. Examples of civic involvement are vanishing, probably leading to the collapse of community. There are many causes for the dilapidation of democracy – perhaps chief among them are dependency on government programs and insurance companies, the loss of Christian habits and mores, technology that encourages self-dependency, and certainly the economic necessity of moving to big cities. Whatever the source, places like Spring Creek indicate that not all may be well in our society. The mother of free society – association and civic involvement – is fading, and collapse of community would almost certainly indicate the demise of democracy in America, as we know it.