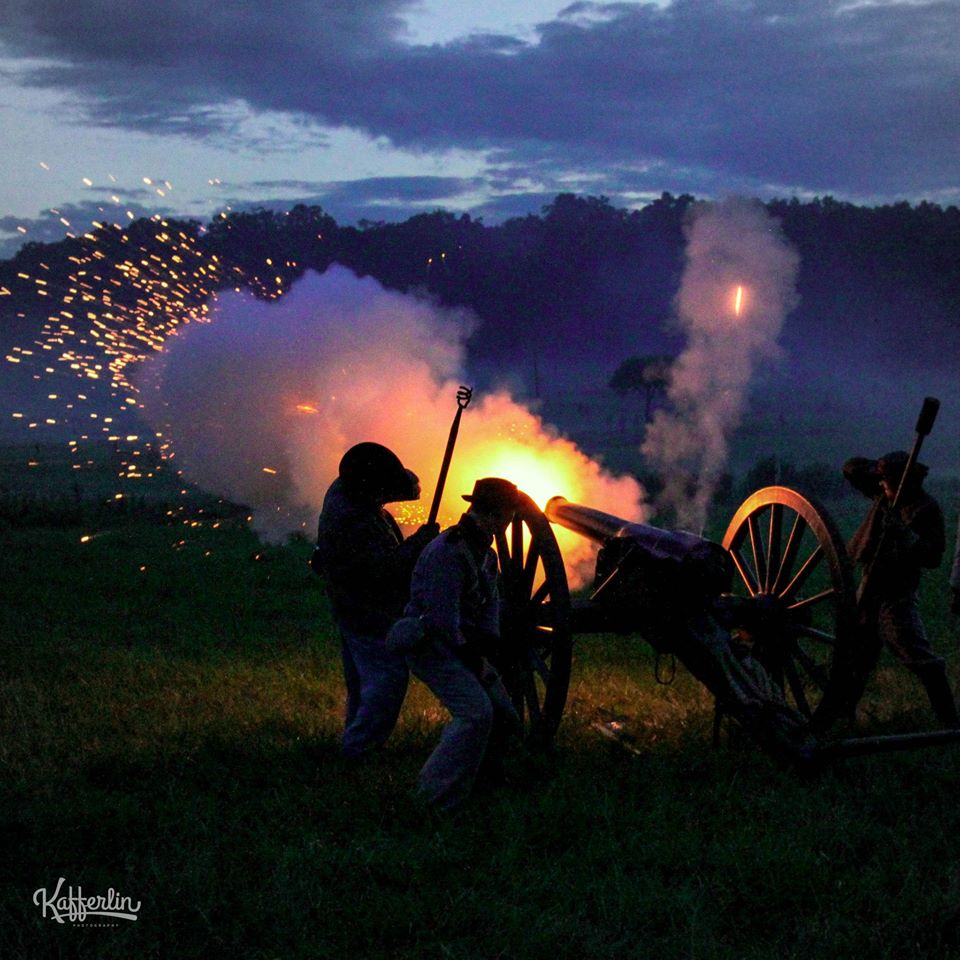 “The brave men…who struggled here, have consecrated it, far above our poor power to add or detract.”

As I write this, I am at the epicenter of any history buff’s dream. It is a steamy, overcast day and I find myself in the small town square of Gettysburg, Pennsylvania, exactly 150 years after the greatest battle of the American Civil War.

As you might expect, the town is overcrowded; its seams bursting with life and memorial. There’s excitement in the air, but it is somber, respectful. Watching as dozens of uniformed soldiers from both sides saunter by, the surreal setting has made me reflect on why I find myself here, today, commemorating the sesquicentennial of the bloodiest battle on American soil.

I’ve been looking forward to this day for years. I started Civil War re-enacting when I was 14, so this event has been in my sights for a decade. It is probably the single biggest event I’ll ever participate in, with somewhere around 12,000 other re-enactors.

I must admit that re-enacting as an adult makes me feel somewhat as if I’m playing war, just like when the neighborhood kids and I played Cowboys and Indians years ago (albeit now with much more expensive toys). Hence, I don’t go out on the field as often as I used to – but this event is different.

In many ways, however, it is still the same, just bigger. Like most re-enactments, when I close my eyes and listen, everything harkens back to a time long, long ago; it’s an authentic sensation. All I hear are clacking horseshoes and hobnails on stone, clinking canteens and muskets, playing of cadences on fife and drum as soldiers march by, cussing or laughing about “sumpin,” and, of course, the heart-wrenching beauty of the bugle playing taps after every battle and when we turn in at night.

Yet, this event is anything but ordinary. To those of us wearing a Blue or a Gray uniform this week, it’s more than a chance to play war and dress up or even to shoot big guns. In part, yes, it is fun. In part, we hope it honors our ancestors. In part, we wish it to convey the lessons of history.

None of those are my ultimate cause, though – especially the fun aspect on a day like this. Camping, guns, history, and friends are great, but my idea of relaxing these days isn’t hanging out with a bunch of sweaty men and horses in 85+ degree heat with 80% humidity wearing a wool uniform while marching in the sun (or random bursts of rain) for miles. (Almost needless to say, I prefer fall re-enactments).

Nor am I here because of the blasé and tired responses that a lot of re-enactors and history buffs often give as a defense for their hobby – sometimes obsession – with the War Between the States (or the “War of Northern Aggression” as about half of the population here calls it).

Yes, “Those who don’t know history are destined to repeat it,” as the 18th century British statesman Edmund Burke purportedly said. And yes, as Alexis de Tocqueville put it, “History is a gallery of pictures in which there are few originals and many copies,” so learning about the war teaches one a lot, from military tactics to the root of many deep, social problems.

Both famous quotes are definitely true, but there is more. I didn’t fully realize it myself until I found myself seated here in Gettysburg square by the house of David Wills— the house where Abraham Lincoln stayed before delivering his most famous speech. Right here, he polished his Gettysburg Address.

At one time or another, I imagine you memorized this short, succinct, beautiful work: “…our fathers brought forth on this continent, a new nation, conceived in Liberty, and dedicated to the proposition that all men are created equal,” among other lines.

President Lincoln speaks of bringing about a “new birth of freedom,” as opposed to when the nation was “conceived in liberty” by the Founders. In other words, he’s saying America had to in a sense be “born-again” in order to live up to its purpose.

Although, the story did not end with that new-birth, or even the last shot of the Civil War, we must continually renew our dedication to those right propositions.

This, then, is my central point – and the reason I’m here on this muggy summer day: to renew the memory of our history reminds us of what the American Experiment is all about. The principles embodied in the Declaration of Independence and the Constitution are still the noble goals, the lodestar of our national identity, and, in essence, that which makes America truly exceptional. Gettysburg plays a role in reminding us of the flawed but Exceptional Experiment.

This event sanctifies time to reflect on higher things. It animates unresolved tensions that are, to this day, being worked out – such as the meaning of equality or the legitimate role of the federal government. It ties us to our ancestors and even through the lasting bitterness of civil war, coalesces a common bond between us all, as Americans, reminding us of what we hold in common and cherish.

Therefore, I dedicate my time at this moment in history, not so much to thank the dead, but rather to honor their sacrifice by challenging us, their heirs. I wonder how many of us seriously ponder those core principles—the ones worth “the last full measure of devotion”?

As I watch dozens of diverse people walk by this consecrated place, I wonder if we, the People—the Living—will ever be called upon to sacrifice like our forefathers, or if we can be “dedicated to the proposition[s]” through continual renewal, avoiding bloodshed.

The magnitude, the toll of Gettysburg finally hit me when I realized I’m at the biggest re-enactment in recent history, but only if you multiply the thousands of re-enactors scattered across the square mile of hayfields in front of me by a factor of five would you come close to the number of the casualties at Gettysburg – just the casualties of one battle – let alone the number of soldiers who fought here and elsewhere. From my vantage point amidst some 62 booming cannons, that fact sickened me as I imagined the carnage.

Of course, it is almost funny that Lincoln said “the world will little note, nor long remember what we say here, but it can never forget what they did here.” It is now one of the best-known battlefields, and his speech one of the most notable in history. Moreover, I find it interesting, almost counterintuitive, that Lincoln also said we can “dedicate” a portion of a battlefield “as a final resting place for those who here gave their lives that that nation might live. “But,” he goes on to say, “in a larger sense, we cannot dedicate—we cannot consecrate—we cannot hallow—this ground.”

If not, what am I, and well over 10,000 others, doing here on this scenic land? Well, we are here because Lincoln is right. Our attempt to honor the lives of the Civil War veterans seems rather feeble. But let us not misinterpret Lincoln’s words.

He is not saying we shouldn’t try.

In some small way, it is paramount that Americans keep the memory of sacrifice alive – and to experience something tangible that reminds us of the brutal dedication to truth, to life, and that original proposition which so many gave their “last full measure” to defend and renew.

Originally posted on Right Progress on 3 July, 2013 by Benjamin Kafferlin