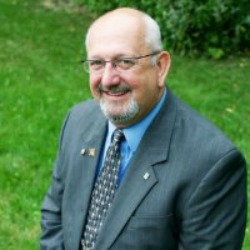 Brad started his career fresh out of high school in 1972 at National Forge Company in Erie, PA – a large steel company that produced the majority of propulsion shafting for U.S. Navy ships and submarines, along with other large finished machined forgings and castings. After learning to run several different machines in the machine shop, he was promoted to Finishing Department Scheduler with only one year of experience. Several other promotions followed, including Scheduling Coordinator Machine Shop, Master Scheduler Shafting & Component Division and Manager of Production Planning & Control. In 1989, he became part owner in the company when it was sold to the employees through an Employee Stock Ownership Plan (ESOP). The company was renamed Erie Forge & Steel, Inc. As a key player in converting the company computer information systems to a network of mini-computers from a large mainframe, they were able to go completely paperless and slash information technology cost by over 90%. By building a relational database network, all aspects of the business were integrated, including human resources, estimating, customer order entry, production inventory control, purchasing, job cost tracking, quality control and accounting, including progress billing on the majority of their sales. Brad was instrumental in forming a Continuous Process Improvement Team to reduce the requirement to heat and straighten propeller shafts at a cost of $5,000 to $7,000 each occurrence. The team virtually eliminated the long standing problem saving hundreds of thousands of dollars per year in rework cost. Brad retired from Erie Forge & Steel with 25 years of experience at the age of 43 in 1997. Since then, he has earned several professional licenses including NASD 6 & 63, Life Insurance & Annuities, Long Term Care and REal Estate Broker. He has been self-employed in the Business Consulting, Financial Services & Real Estate business. Brad is committed to continuous process improvement ideology both personally and professionally. He has been very active in various charities including his church, Kiwanis, Habitat for Humanity, Service Corps of Retired Executives and Big Brothers & Sisters. He moved back to his hometown of Youngsville, Pennsylvania in 2013 and serves as Board Chair for Love INC of Brokenstraw Valley. Brad has been married for four decades to his wife, Pastor Kathy Thompson (Associate Pastor of the Youngsville Free Methodist Church) and has two daughters and four grandchildren. He enjoys snow skiing, kayaking, hunting, woodworking, and scuba diving.